Arancini balls: Catania and Palermo challenge each other with blows of goodness

«Beyond the dispute between Palermo and Catania, the ball or cone shape, the whole all of Italy agrees: arancini balls are a unique goodness!»

The origins of arancini balls, or “Arancino”, a historical product of Sicilian gastronomic culture, whose name according to the writer Gaetano Basile derives from its resemblance to orange, is much discussed. It would seem, in fact, a dish of Arab derivation, born in the period of Saracen domination in Sicily. More specifically, during banquets there was a habit of placing at the center of the table a rich tray of saffron-flavored rice seasoned with vegetables and meat. The crispy breading that wraps the rice, however, seems to date back to the time of Federico II Di Svevia, a stratagem used to make the dish ‘transportable’.
–
This Mediterranean delicacy is generally stuffed with meat sauce, peas and caciocavallo, or diced ham and mozzarella. It is quick and convenient to eat during lunch break at work, a birthday party or on the street. It is also a versatile product for experimentation: in fact there are recipes that include, in addition to rice, the use of mushrooms, sausage, eggplant, salmon, swordfish, and seafood, not to mention the sweet variations, with cocoa, gianduia cream, chocolate and the typical sugar coating. 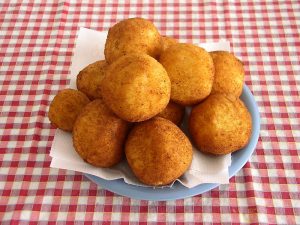 Exported to and known throughout the world, arancini balls have made, and still make, the Sicilians proud to be the “creators” of such an appetizing and genuine product that has contributed to making Sicily a sought-after tourist destination. But if all the islanders agree on the exquisiteness of their own creation, there is a morphological factor that divides them: the palermitans use the feminine “Arancina”, while the Catanesi use the masculine “Arancino”. The variation in the morphology corresponds to the variation in the form: in Palermo, in fact, this fried food is prepared round-shaped, just like the orange fruit, while in Catania and Messina the arancino takes on the classic and more widespread cone structure. Regarding the debate on the female or male gender of the product, the Accademia della Crusca expressed itself a few years ago. Considering both the titles and stating that those who say “arancino” Italianize the dialectal morphological model, while those who say “arancina” do nothing more than re-propose the standard Italian model.

Where to eat some excellent arancini balls from Palermo:

Located in via Terrasanta 111, Ke Palle is the temple of the Arancina. You can find 40 different combinations of rice, pasta, gourmet and dessert arancini balls. Among others: speck, walnuts and mozzarella, pork chops and barbecue sauce and there is a vegan version too (tofu and spinach) and the classic one with meat sauce. 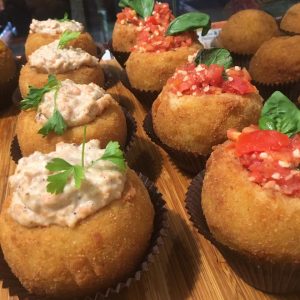 A historical place in Via Lincoln, Bar Touring prepares giant arancini balls,  400 grams of slightly reddish rice seasoned with a good meat sauce. Designed and handed down by the master pastry chef Antonio Genovese, this arancina format is an institution in Palermo, it is perfect for those who love food challenges among particularly hungry friends! 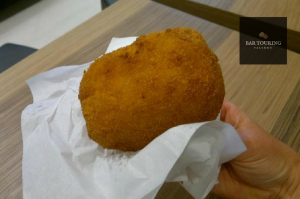 Where to eat excellent arancini  balls from Catania:

Open since 1897, it is located in the heart of the historic center of Catania in Via Etnea 300-304, at the corner with Via Umberto. The arancini balls here are an explosion of flavors and their warhorse is the arancino alla catanese: in addition to rice and sauce, the filling is made with fried aubergines and ricotta salata: Sicilian flavors par excellence. 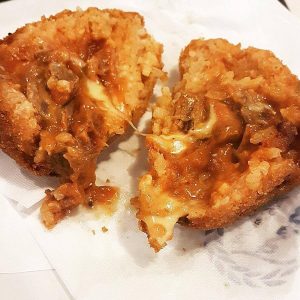 Highly recommended by the people of Catania and located in Via Beato Cardinale Giuseppe Benedetto Dusmet 7, their arancino is fried at the right point, crunchy, not greasy. Inside you will not find the simple ragù, but pieces of meat. L’Etoile D’Or is able to satisfy your cravings at any time: this business, in fact, is open 24 hours a day, every day of the week. 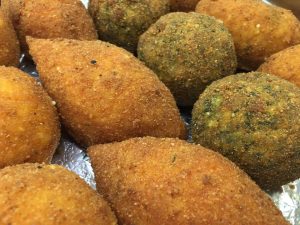 Ingredients for the filling: 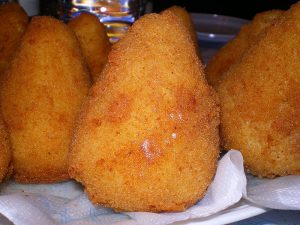 Start by frying finely chopped carrots, celery and onion in the pot, add the meat and once it has browned over low heat, blend with half a glass of red wine. Add the tomato paste and stir, after a few seconds add the tomato sauce. Season with salt and pepper. Put the lid and cook over low heat for about 2 hours, until it becomes “tight”. Put the water to boil in a pot, pour the rice and, before draining, add the saffron. In another pan, in the meantime, cook the peas stew. Whisk the rice with the butter and grated pecorino cheese, flatten it to cool it down.

Cut the caciocavallo into cubes, take a layer of rice with wet hands positioned in the shape of a cone, put the sauce appropriately chilled, some small pieces of meat, the peas, and two or three pieces of caciocavallo. Define the shape by covering the filling with the same amount of rice. Beat the egg with a fork, pass the arancino and then bread it in the breadcrumbs. In a saucepan with high sides, heat very high seed oil over high heat, then dip the arancini balls so that they are almost completely covered with oil. Once you have reached the perfect browning, allow to cool a little on the kitchen towel. There are those who start from the tip and those who start from below, in any case I wish you good arancini balls to everyone!

Restaurants with fireplaces: 5 rooms with a warm and welcoming atmosphere

Southern Italian cuisine: products that are worth trying