Made in Italy clothing: the best spotted at the Oscars 2018 ceremony

Here we are! Even this year the Academy Awards ceremony, better known as the Oscar night, has arrived. Many Hollywood stars, including actors, producers and directors, gather every year to celebrate their talent and their successes, in what is now known as the most glamorous  year-round ceremony, characterized by elegant clothes, fluffy skirts, sparkling jewels and, of course, a lot of Made in Italy clothing.
–
Not just movies and statuettes, therefore… The Oscars are also the perfect time to show off their best outfits. Not surprisingly, the  red carpet in  front of the Dolby Theater is invaded by celebrities, journalists, photographers and curious passers-by, thus giving life to a real party before the party. Precisely for this reason, the Hollywood red carpet this year has been the focus of media attention. In fact, starting from the Golden Globes  of last January, actors and actresses had declared that they would wear only black clothes, as a sign of protest and solidarity for the victims of sexual harassment in Hollywood. For once, Hollywood has imposed a limitation on the red carpet and all the stars are committed to respecting it.
–
At the Oscar 2018, however, things went differently … No more total black dress code , to make it clear to the general public that Hollywood activists and all women linked to the Time’s Up movement are not limited to wearing black clothes, but are ready to take their protest outside the golden confines of Hollywood. Here, then, that the most famous red carpet in the world has been invaded by colorful evening dresses. Between silk, chiffon and tulle, embroidery and prints, sequins and glitter, here again this year the  Made in Italy clothing  were the real stars of the Oscars. Let’s find out together what were the most beautiful Italian dresses seen on the red carpet of the legendary Dolby Theater… 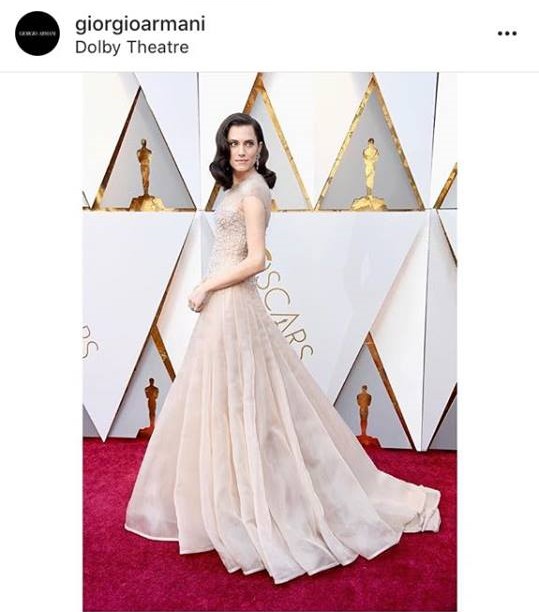 Let’s start immediately with a super- glamor couple. Director Alejandro González Iñárritu and his wife paraded Prada from head to toe on the red carpet. He opted for a classic dark gray suit with shawl collar, while the beautiful Maria Eladia chose a clean-cut red dress, embellished with embroideries and contrasting rhinestones.

The actress of  Get Out was a true vision wrapped in this pale pink dress with a trapezium line and embellished with rhinestones on the bodice. Perfect Made in Italy clothing worn by a true Hollywood diva who has won the hearts of the public (and photographers) of the Dolby Theater.

Here we have some more Made in Italy clothing by Armani, this time for Armie Hammer, who wore a custom-made burgundy velvet suit. Breasted jacket with spear-shaped revers  and a classic white shirt, for an elegant and modern outfit.

Nominee for the best original song, Common wore a tailor-made tuxedo for him by Giorgio Armani. The suit was anthracite gray with  contrasting lapels, combined with a classic white shirt and a  black bow tie. Made in Italy clothing in pure Hollywood style.

The wonderful British actress chose a dress in tulle and water-green lace, decorated with lots of little polka dots and finished on the bodice with embroidered flowers and butterflies. Certainly one of the most romantic Made in Italy clothing of the Oscars 2018.

The best actor in the Oscar 2018 never goes wrong! Elegant in his Prada suit, he brought Hollywood elegance and Italian taste to the red carpet. The black tuxedo in mohair wool had the jacket off the shawl collar, combined with a classic white shirt and a black bow tie.

Asymmetrical neckline and a long train, these are the characteristics of the  Versace Made in Italy look worn by Jennifer Garner. The blue chiffon dress was composed of a wrapping bodice (one of the distinctive signs of the Versace fashion house), embellished by a long  scarf  of the same color that highlighted the décolleté and then ended in a long train.

The actor and rapper dashed through the red carpet with very elegant Made in Italy clothing, signed by Ermenegildo Zegna. The blue outfit was composed of slim pants and a breaded top with contrasting revers, a white shirt and black papillon.

The Call me by your name (we talked about it here) filmmaker wore an outfit composed of a blue jacket with jacquard fabric from the 50s, with  contrasting lapels  and blue  navy pants. A light blue shirt and a  blue bow tie  completed the outfit.

The beautiful African-American actress wore a beautiful golden chainmail dress, with a single sleeve embellished with a rich Swarovski decoration. A  really perfect outfit  for the most glamorous  night of the  year!

Perfect as always, Nicole Kidman has relied on  King Giorgio  for her red carpet. She wore a blue laminate dress with a sweetheart neckline and a dizzy slit. The clean and simple line of the dress was enlivened by a large ton sur ton ribbon at the waist.

The wonderful actress and activist of Time’s Up paraded on the red carpet with a custom-made Gucci dress.  Alessandro Michele’s creation had a flounced skirt and a crisscrossed bodice, adorned with a cascade of jewels.

Even the best supporting actor wore a Prada suit. His  single-breasted gray woolen tuxedo  had a shawl collar, a light blue shirt and a small  dark gray bow tie. A true Hollywood star!

The beautiful Samara Weaving has also relied on the Schiaparelli brand and its color par excellence, the shocking pink. The Australian actress wore a long pink dress and coral in silk tulle with a very deep neckline and decorated with crystals embroidered at the waist.

Her total red look  was one of the most photographed dresses of these Oscar’s 2018. The dress was simple and soft, slightly tight at the waist and enriched with a diamond necklace. The attention was drawn to the long chiffon cape, enriched with ruches and ruffles,  in perfect Hollywood style but at the same time suitable for her young age.

Another Prada-couple, this time composed of the American actor Willem Dafoe and his wife Giada Colagrande, Italian actress and director. He wore a dark blue suit with  spear-shaped lapels in satin, combined with a black shirt and tie. Instead, she chose a long black dress with a wide V-neck, with an elegant drapery at the waist.

The beautiful actress and dancer enchanted everyone by wearing a chocolate-colored one-shoulder dress from the haute couture  line  by Giambattista Valli. The dress was made entirely of  chiffon  with draping along the top and a belt at the waist. To complete the look, gathered hair and showy jewels, just like a real diva.

So, once again Italian fashion has enchanted the whole world, proving to be able to combine the taste and quality of the Belpaese with the glamor  and glitz of Hollywood. Not for nothing, our designers are always among the favorites of celebrities all over the world!

Italian formal dresses and their crazy prices: the most expensive in history

Italian VIP: ready for some gossip? Discover his most incredible vices