«Undecided about what to see when you visit Lazio? Do not worry! We’ll take care of it: here’s the Snap Italy ranking of the 5 unique places to visit in this fantastic region»

Deciding what to see when you visit Lazio, with all the beauties and spectacles that it offers us, is often really difficult. Between small villages like Pitigliano or huge cities like our Rome (click here to discover all its beautiful views), Lazio is one of those regions that best conveys the variety of Italy, showing us how many realities can coexist inside it, so different yet so similar to each other.

In this article you will find a list of 5 truly unmissable places to see when you visit Lazio, which not only boast an extraordinary beauty, but are also very special places, unique in their kind and very important from a historical-cultural point of view.

Let’s start our TOP-5 of what to see in Lazio with one of the many UNESCO heritage sites that we have in our country. Villa d’Este (institutional site), located in Tivoli, is a truly surreal world, a kind of enchanted garden that for its extraordinary beauty does not seem to be real. With its fountains, caves, water lilies and water games, Villa d’Este is perhaps the best example of a Baroque/Mannerist Italian garden. Built by Hippolytus II and by Cardinal Alessandro d’Este, who continued the works after the death of the former, in its realization Villa d’Este boasts names such as Pirro Logorio, Antonio Tempesta anf Gian Lorenzo Bernini.

The number of fountains that this Italian Renaissance masterpiece presents is truly impressive, but the spectacular and imposing Fountain of Neptune stands out amongst all; created in 1927 by Attilio Rossi, this fountain comes from the restoration of what was the abandoned waterfall of Bernini, whose splendor is still visible today. At Villa d’Este, exactly in the suggestive avenue of the hundred fountains, scenes of the film Ben Hur were shot. In 2014 it was the 10th most visited Italian state site, with 451,999 visitors. 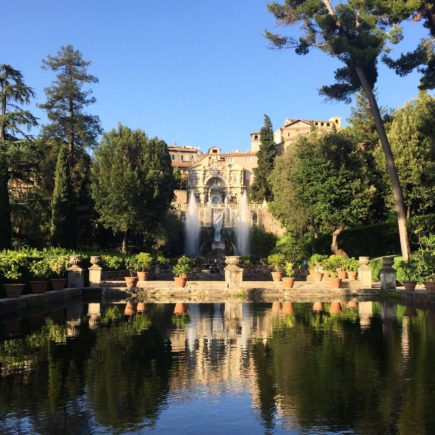 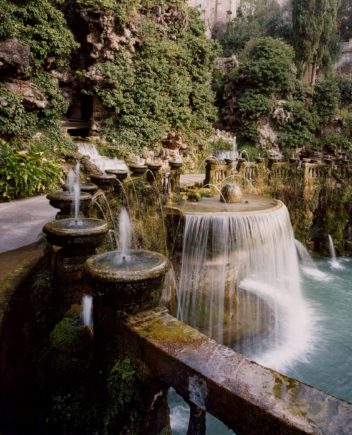 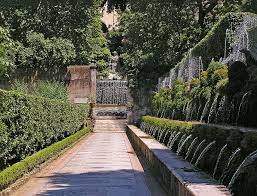 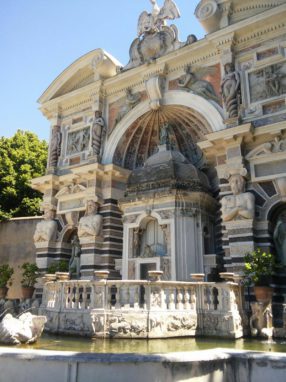 We proceed with our ranking of what to see when you visit Lazio with this splendid example of Renaissance architecture, in the province of Viterbo (for a perfect itinerary in the city, click here! ). Managed by the Polo Museale of Lazio, Palazzo Farnese ( official site ) presents a suggestive pentagonal shape, which makes it a truly unique place not only in Lazio, but throughout our country. Access is via a majestic double flight of stairs located on a trapezoidal square. Inside, however, although all of the rooms frescoed by the greatest Renaissance masters are extraordinary, what really stands out is the magnificent Scala Regia, a spiral staircase with steps so wide that it is said that Cardinal Alessandro Farnese mounted them on horseback! Jacopo da Vignola, who was also the architect of the palace, made the frescoes on the staircase. On the back of Palazzo Farnese there are the extraordinary Italian gardens, a key item  for a Renessaince residence of such beauty.

A Little curiosity: Palazzo Farnese is much loved by cameras, so much so that scenes of L’Avaro (with Alberto Sordi), Il Padrino part III and the tv series Il Paradiso with Gigi Proietti were shot here (just to mention the most famous). 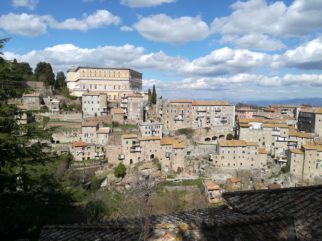 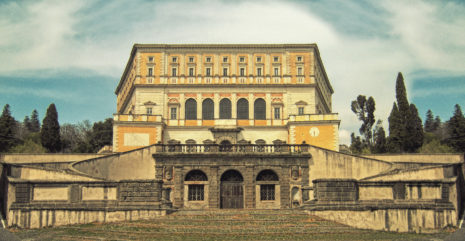 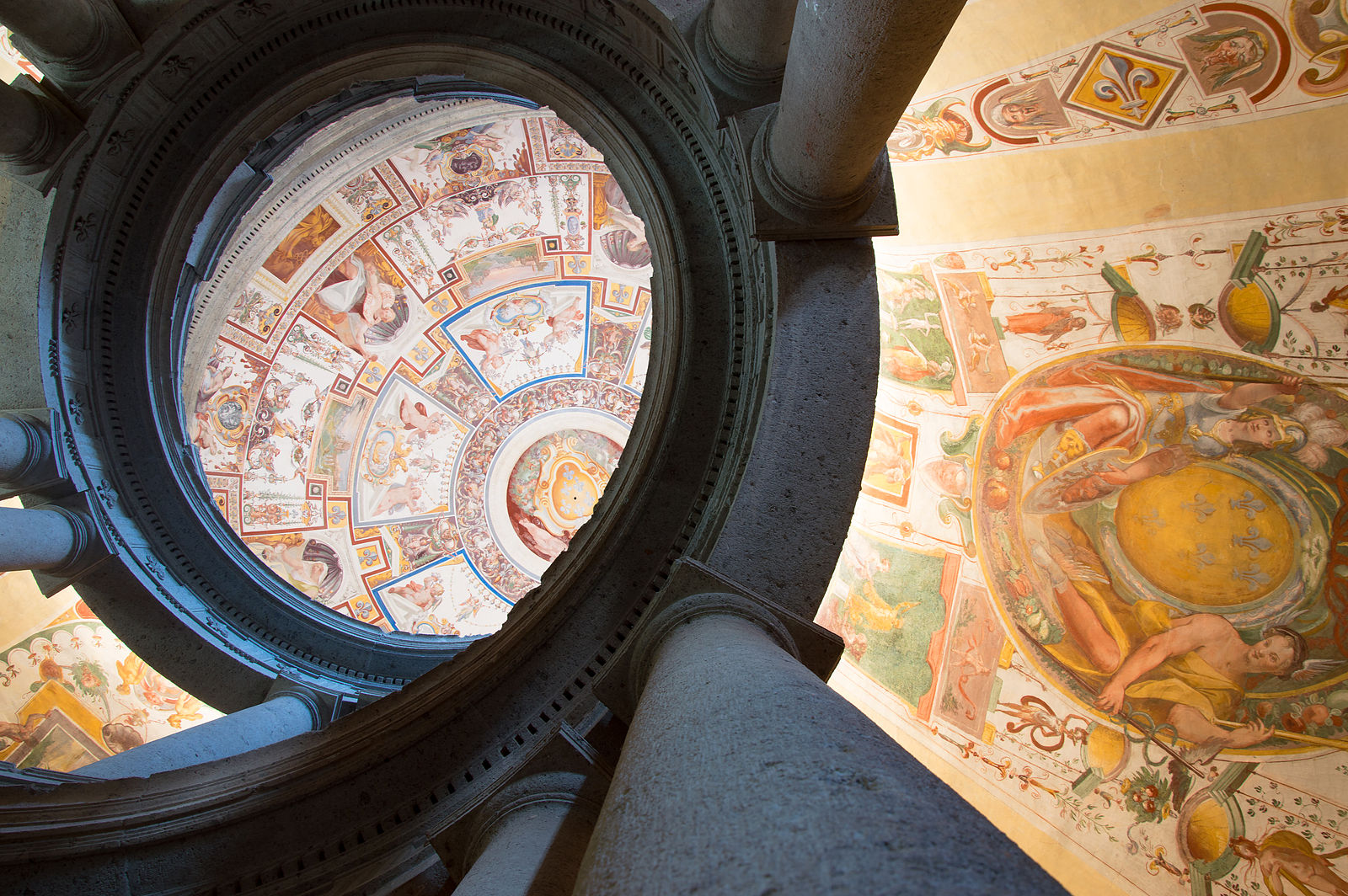 This is not the first time I talked about this beautiful village, and of course I intend to do it again: in a TOP-5 of what to see when you visit Lazio, Civita di Bagnoregio must absolutely be mentioned in the ranking. This small village in the province of Viterbo is better known as “the city that dies ” (although, due to its small size, anything can be said other than that it’s a city, ed), as it stands on a rock that, day by day, it erodes more and more. But this doesn’t come as a surprise: it was the Etruscans who founded this village, and already in their time (2500 years ago!) they had to fight with the erosive phenomenon that had already begun years ago.

There are no particular places to see in Civita di Bagnoregio, because in itself it is an unrivaled tourist attraction; in this village where no cars are moving, you can only access it after having paid a € 5 ticket (trust us, it’s worth it!) and having traveled a long bridge that will take you to the heart of the town. Among alleys, characteristic taverns and breathtaking views, lose yourself in the magic of Civita di Bagnoregio, a unique place that we Italians can, indeed we must, boast about. 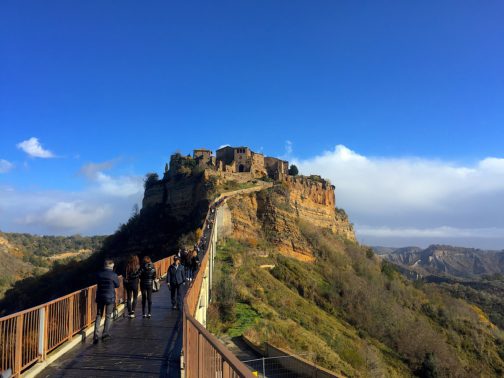 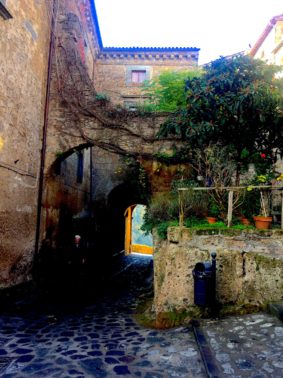 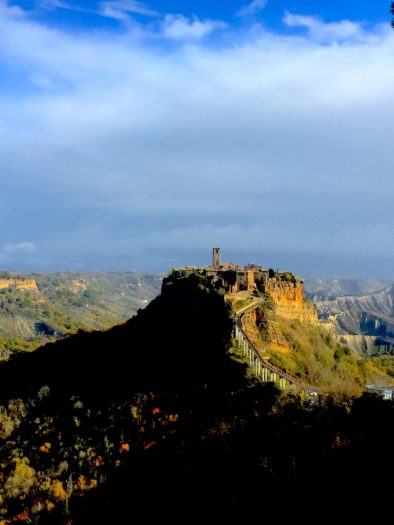 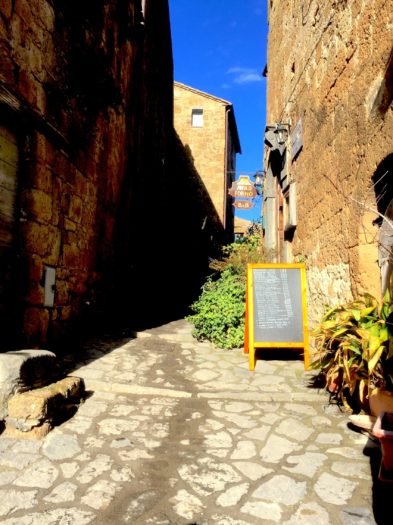 Monastery of San Benedetto in Subiaco

In the characteristic town of Subiaco, another of the most beautiful villages in Italy, in the province of Rome, is the Sacro Speco or San Benedetto Monastery, built in the 11th century. For centuries the place remained deserted because only the cave, in which St. Benedict withdrew in a hermit experience, was a destination for pilgrims and devotees.

So why is the Monastery of San Benedetto in the TOP-5 of what to see when you visit Lazio? Because it’s a beautiful building entirely leaning against the rocky wall of Mount Taleo, at a height of 650 meters, and is a place with an unusual atmosphere. The Monastery (this is the official site) consists of an Upper Church and a Lower Church; it obviously also hosts the Sacro Speco, or the Holy Cave of San Benedetto, where the marble triptych by Antonio Raggi, a pupil of Bernini, is kept. Important in the lower part are the Holy Stairs, which had a meaning of purification, and which pilgrims climbed on their knees. In the chapel of San Gregorio instead, you will find the only portrait in the world of San Francesco d’Assisi. 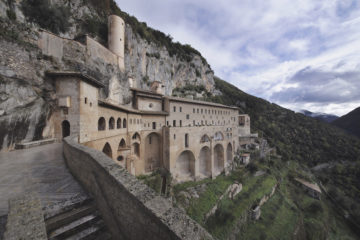 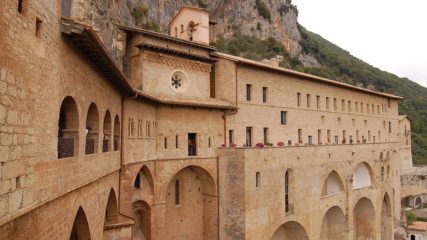 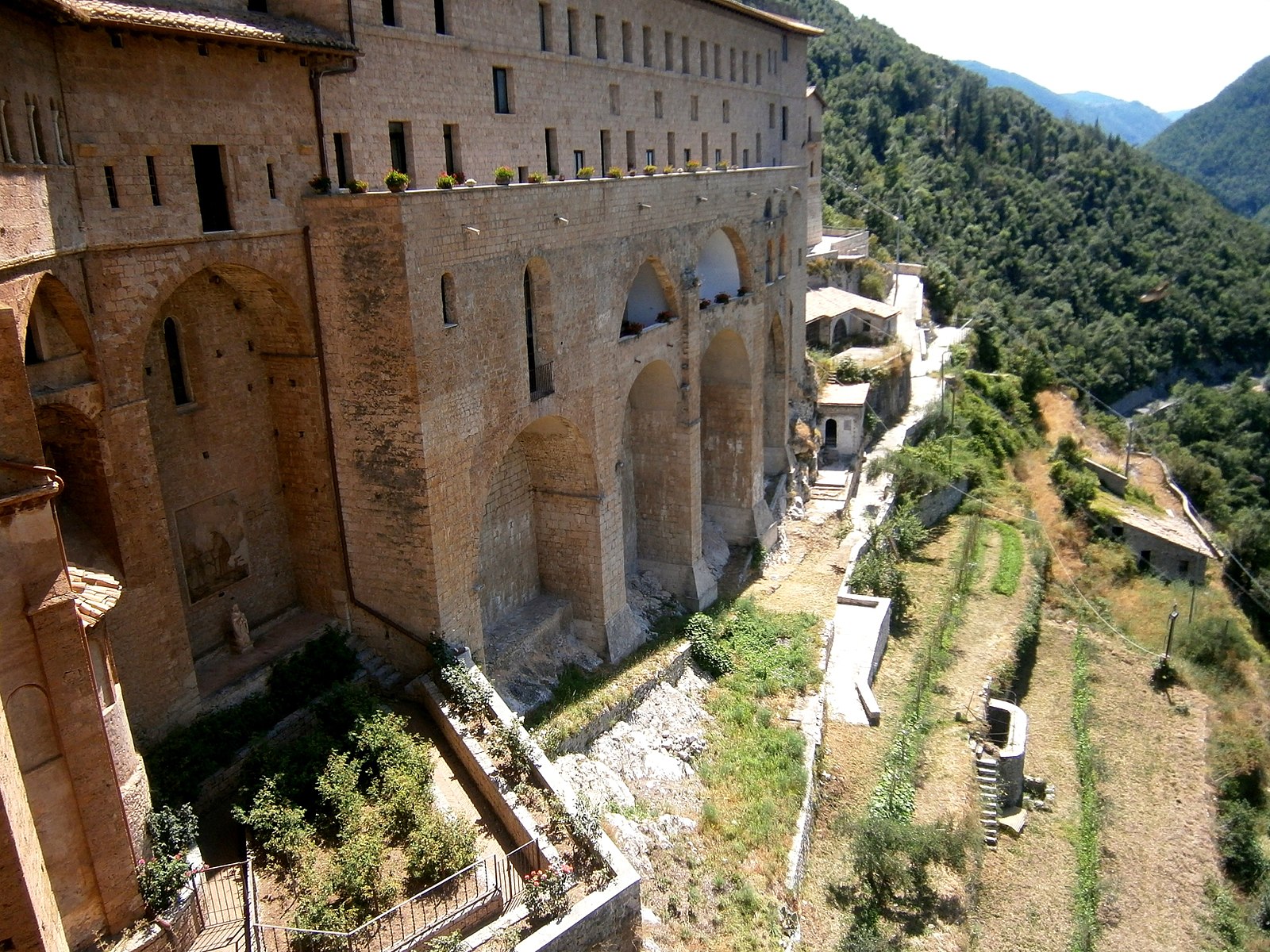 By pietro scerrato [CC BY 3.0], via Wikimedia Commons

To complete our TOP-5 of what to see when you visit Lazio, after all these mountain places, we move to the sea. Ostia is one of the oldest Roman colonies, and the Archaeological Park of Ostia Antica preserves the remains of those ancient splendors. If you are lovers of history and archeology, the excavations of this city are just right for you: here you can admire remains like those of the imperial ports of Claudius and Trajan, or the Necropolis of Porto (with over 200 funerary buildings). An entire area is dedicated to the old city of ancient Ostia: tradition has it that the town was founded by Anco Marzio around 620 BC, who wanted to exploit the salt pans located at the mouth of the Tiber (not by chance ostium: river mouth). A visit to this splendid archaeological park will put you in full contact with the history from which we all originate; a unique experience of its kind in the Romans’ most beloved beach, both ancient and contemporary.

It is strange to think of the Ostia as we know it, filled with bathers, fashionable establishments and the center of nightlife, as something that encloses such an ancient and important history, but the marvel of Lazio, and of all Italy in general, is precisely this: in every corner, whether it is sea, mountain, lake or whatever you want, we are, fortunately for us, invaded by culture, by greatness and by history. 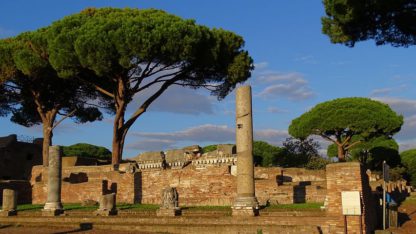 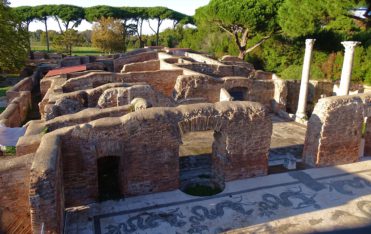 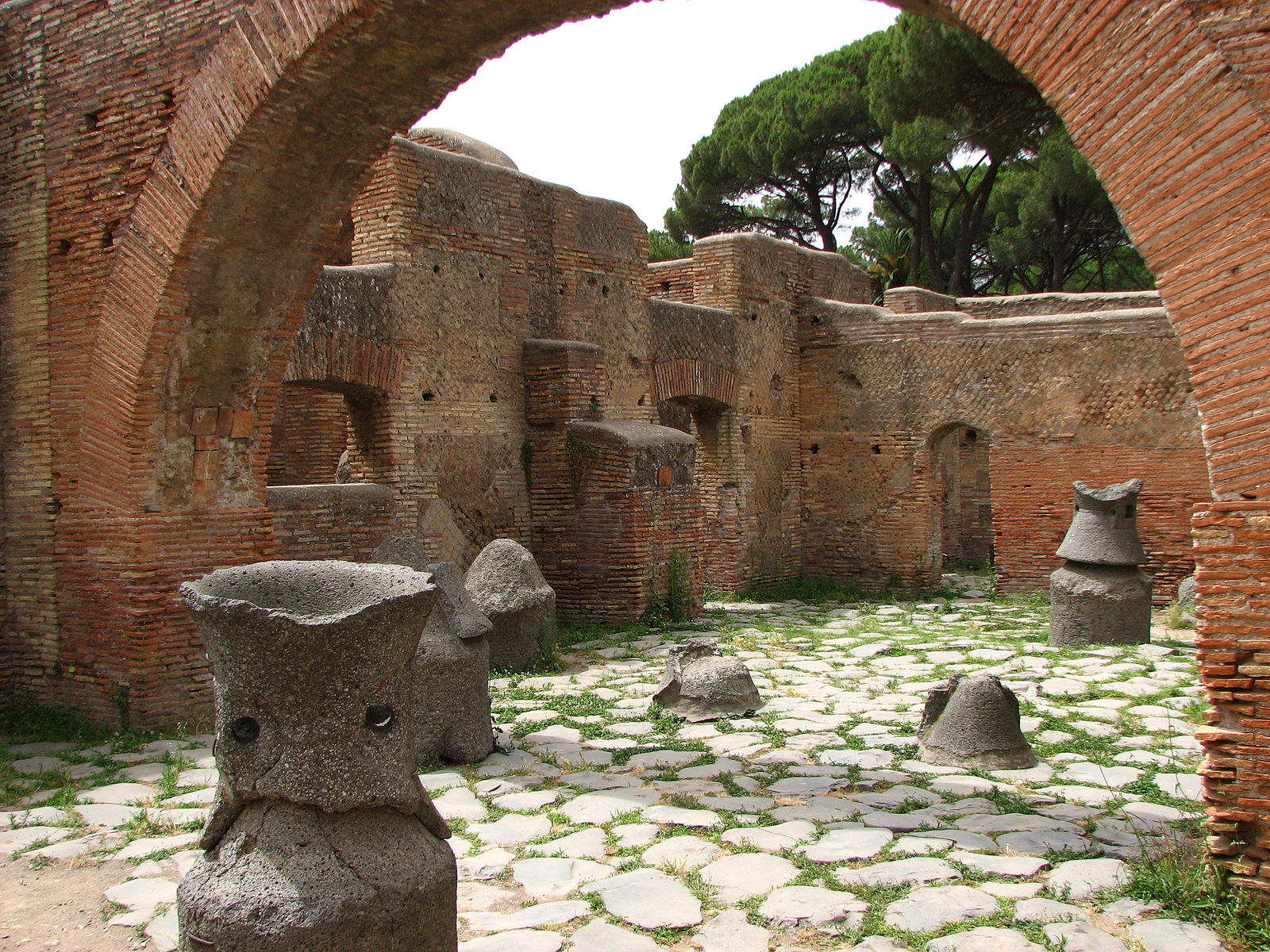 By Patrick Denker [CC BY 2.0], via Wikimedia Commons

What to do in Selinunte: the new Pompei is in Sicily