Unusual things to do in Italy: mysteries, legends and magical places of the Belpaese

«Italy is not only full of beauty and culture, but also of mysteries, secrets and legends that make it even more fascinating: let’s discover together some of the most unusual things to do in Italy»

We have already spoken of esoteric Rome, of disturbing places such as the park of Bomarzo and the most beautiful Roman angels: we remain wrapped in this suggestion and we go on to discover the most unusual things to do in Italy.
–
Yes, our land is full of beauty, culture and history, but it is also one of the most mysterious countries in the world. In fact, each of its corners contains a secret, a legend, a disquieting mystery dating back to the Middle Ages, to the Roman or Etruscan age. In fact, although Italy is the home of Christianity, it has always been inhabited by a mosaic of peoples, especially pagan peoples, who have left their mysteries enclosed in our land over the centuries. Let’s discover together the most unusual things to do in Italy, with its magical and mythological places.

Chapel of Sansevero in Naples

It was the duke of Torremaggiore Giovan Francesco di Sangro who built the Sansevero chapel (official site) at the beginning of the 17th century, in the historic center of Naples; but it is to Raimondo di Sangro, seventh prince of Sansevero, that we must attribute the merit of having made it so magical and full of mystery. Meanwhile, we start from the premise that tradition has it that Raimondo was the first Grand Master of Neapolitan Freemasonry, an alchemist who did diabolical experiments. The most famous treasure of the chapel is the Veiled Christ: a true masterpiece that represents one of the most evocative and beautiful sculptures in the world. The work, by Giuseppe Sanmartino, should have been a simple life-sized statue of the Christ covered by a shroud; but this, in reality, is so transparent and finely folded that it does not seem to be marble. For this reason it is believed that its transparency is the result of an alchemic marbling process carried out by Raimondo himself. The same reasoning goe for the statue of Pudicizia, made in honor of the prince’s mother: the veil really seems to be real and the veiled woman is a clear reference to Isis, Masonic goddess.

Another small, disturbing detail: in the subterranean Cavea are preserved the famous Anatomical Machines, two skeletons of a man and a woman in an upright position with the altero-venous system almost perfectly intact. Even today it is not known by what procedures or materials a similar and perfect preservation of the circulatory apparatus could be achieved. Visiting this magical place definitely makes it on our list of the most unusual things to do in Italy.

Hermitage of Montesiepi in Siena

Near the Abbey of San Galgano (official site), in the province of Siena, stands the Hermitage of Montesiepi, built immediately after the death of the saint over the ancient hut where he lived the last year of his life.  The abbey is already a very suggestive place in itself because, without the roof, it gives its visitors an almost surreal experience. But it is the hermitage of Montesiepi that really deserves to be included in the list of magical places in Italy: it is in fact one of the places where it is said that the Holy Grail is guarded (which is believed to be either the chalice used by Jesus at the last supper or the cup used by Mary Magdalene to collect the blood of Christ); and the shape of the Rotonda looks like an inverted cup! But the surprises are not over: in fact inside the Hermitage, in the center of the Rotonda, there is the famous sword of San Galgano guarded by a glass case and stuck in the rock by the saint for more than 800 years in order to transform it into a cross, just as he transformed his rebel life into Christianity. If you’re looking for unusual things to do in Italy, you cannot miss this magical place. 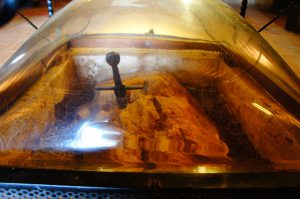 Amongst the magical places to see in Italy, in Sicily, in the province of Palermo (did you know that it’s this year’s capital of culture?) rises the monstrous and fascinating Villa Palagonia (official site, one of the most visited and most famous magical places on the island. Goethe was almost disgusted, Salvador Dali instead wanted to buy it to make it his residence in Sicily. Is it a coincidence that he was so into all the monstrous parks of Italy?

The construction of Villa Palagonia began in 1715 at the behest of Don Ferdinando Gravina, but it was the heir Francesco Ferdinando Gravina II known as Il Negromante that really made it one of the strangest magical places in Italy. Extravagant person, who dedicated his life to the study of mythology, Francesco adorned the villa with grotesque statues, deformed animals, anthropomorphic and disquieting figures steeped in myths and legends. In particular it is said that these monsters carry abortions or give birth to horrible looking children, just like theirs. Others, however, even believe that the ghost of the crazy Necromancer still roams the villa. If this isn’t part of the unusual things to do in Italy, then I don’t know what is. 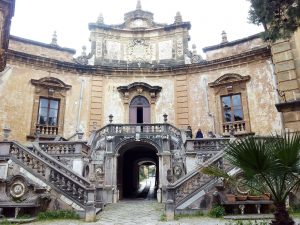 Bisentina Island in the Lake of Bolsena

It is said that on this island one can find one of the entrances to the Kingdom of Agarthi, a legendary kingdom that is believed to be located within the Earth. It seems that this kingdom is inhabited by evolved, peaceful and intelligent people, and that its accesses, visible only to the enlightened and initiated people, are scattered around the world. And so it seems that this small island, considered sacred since the time of the Etruscans, is one of those magical entrances. Strange, right?

Castel del Monte is certainly one of the most beautiful and famous castles in Italy, and perhaps also the most enigmatic. It was built in the 13th century by Frederick II, but the reasons for it are unknown: it is isolated and not in any strategic area, so it certainly had no defensive purposes.

Everything revolves around the number 8: it has an octagonal structure, with eight towers also octagonal, and inside there are eight rooms. Many interpretations have been formulated: for some even this could guard the Holy Grail, while others believe that it itself is the Holy Grail (rather surreal!). There are also those who have seen it as a real initiatory path, an astronomical observatory or a huge mathematical device. Are you freaked out yet? Especially if you are, don’t miss out on one of the most unusual things to do in Italy and go visit this magical castle.

Riviera of the Cyclops in Aci Trezza

Definitely one of the most magical places in Italy, this extraordinary Sicilian place owes its fame to the mythological events of Ulysses narrated in the Odyssey. In fact Homer narrates that the Cyclops Polyphemus, son of Poseidon, lived here. He managed to capture Ulysses and his companions during their journey, devouring some; but, as we all know, with his cunning Odysseus managed to blind him with a reddish-edged pole. Legend has it that Polyphemus, blinded by both pain and rage, threw fragments of rock towards Ulysses. These rocks are today’s Islands of the Cyclops, an enchanting place, full of charm, legends and magic, especially with the extraordinary lights of the sunset.

Turin: the most esoteric city in Italy

If we’re talking about unusual things to do in Italy and its magical places, we can’t not mention Turin: in fact, legend has it that this city was founded by Fetonte, son of Isis, goddess of magic. Turin is also part of two magical corners: that of black magic along with San Francisco and London, and that of white magic with Lyon and Prague. In particular it is said that the central Piazza Stauto is par excellence the site of negativity and evil, especially because of its Monument to the Frejus Tunnel. There are so many other things would have to be said about the magic and the many esoteric places in Turin, that a small paragraph is not enough … but do not worry! Soon I will reveal to you every mystery of this city.

We hope you’ve taken note of the most unusual things to do in Italy: now pack your bags and go visit the magical places of our peninsula.

Where to eat in Rome: a delectable tour of Roman street food

Winter destinations in Italy: here are the most targeted