«The Barilla group, a staple of Italian culinary history, has supported several sportsmen. Amongst many sports, Barilla was also one of the most important football sponsors in Italy. Let’s discover the past and present of this relationship together»

Created in Parma in 1877 by a bread and pasta shop, today Barilla is one of the leading Italian groups in the food sector, the world leader for pasta and sauces in continental Europe, for bakery products in Italy and for crispbread in the Scandinavian countries. Its relationship with sport has always been very active, thus finding the right recipe for success. “Sport is energy, momentum, commitment, just like Barilla pasta: a good energy that ignites life, nourishes passions and transforms them into winning projects. For this reason pasta is not only a fundamental food for sportsmen, but it is an indispensable source of carbohydrates for all those who need vitality and taste to continue to pursue their dreams”. In fact Barilla has become one of the most important football sponsors in Italy.

From 1981 to 1994  Barilla (official website) was the main football sponsors of Roma Calcio, which won the championship in 1982. With a sponsorship contract so long and rich with successes, Barilla improved its presence in the market, strengthened its popularity and, consequently, increased its turnover considerably. In addition to Roma Calcio, Barilla has had many other examples of collaboration with the world of sport: from skier Alberto Tomba (we talked about it here) to the tennis player Steffi Graf; to Francesco Moser in cycling, Valentino Rossi in motorcycling, up to the most recent partnership with Federica Pellegrini, Ricardo Kaka, Stephan El Shaarawy and Mikaela Shiffrin. A particular relationship has long been linked to Barilla and Alex Zanardi, Olympic gold at the 2012 Paralympics.

Football sponsors but not only: in 2015 Barilla became the main sponsor of the Italian national basketball team for men, women and juniors. The collaboration has arrived at the Euro Basket 2015: the European men’s basketball championship, held from September 5th-20th in several countries: Croatia, France, Germany, Latvia, with the final stage in Lille, France. It was the first time that the Barilla group decided to support a Federation and its National teams. The Blue Jersey Basket and the Barilla Group came together to continue to convey the values ​​that unite them: tradition, quality, passion and Italian spirit.

” We are family “ was the claim that identified the activities of the National basketball team: one big family united by the Azzurro (light blue) and the desire to play sports in a healthy and transparent way, to represent Italy in the world.

«Barilla is happy to support a team sport where fair play characterizes the attitude of both the players on the pitch and the fans in the stands. A sport in which Italian champions have also emerged in the American NBA. On the one hand we will have the opportunity to support a sport of increasing popularity, on the other it will be possible to collaborate on the importance of proper nutrition”. These were the words by Paolo Barilla, vice president of the group at the time of this sponsorship. 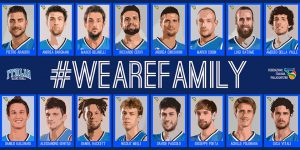 Also in 2015 the partnership with the American star of alpine skiing and Olympic gold medalist, Mikaela Shiffrin, was renewed. Among the top athletes of the US national team of the 2010, Mikaela is a specialist in technical disciplines (giant slalom and special slalom), but has proved to be competitive even in the faster ones (downhill and supergiant). In the special slalom she obtained the Olympic title at the XXII Olympic Winter Games in Sochi 2014 and the world title in Schladming 2013, at Vail/Beaver Creek 2015 and in Saint Moritz 2017. In addition, she won the overall World Cup in 2017 and the special slalom World Cup in 2013, 2014, 2015, and 2017. Her latest win dates back to December 1, 2017, when at the beginning of the 2017 – 2018 season, she obtained the first podium of her career in the in Lake Louise downhill World Cup (3rd place); the next day she won her first victory in the specialty in the same place. Also thanks to the victory in the special slalom of Flachau January 9, 2018, Shiffrin becomes the first skier ever to win the first five races of the calendar in this specialty, also equaling, with 41 successes, the record of victories in the Women’s World Cup obtained before the twenty-third birthday, until then belonging only to Annemarie Moser-Pröll.

Her partnership with Barilla began in 2012. 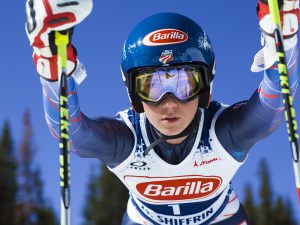 “It was a tremendous privilege to support Mikaela and to have been there when her career took an incredible flight over the last few years” said Melissa Tendick, Barilla marketing vice president for the Americas region. « Mikaela is a fantastic ambassador for the Barilla brand and she demonstrates the positive benefits of good nutrition. Our hope is that athletes of all levels – starting with young people – take into consideration the idea of ​​introducing pasta into their diets as a source of sustainable energy. »

In addition, Shiffrin regularly integrates Barilla Protein PLUS ™ into her diet, often combining pasta with vegetables or other protein sources. “I make sure to make balanced meals that include a plate of pasta every day – says Mikaela – it is easy to combine the dough with dairy products or vegetables for a quick, simple, tasty and nutritious meal at any time. With my rigorous training and travel program, I need a protein-rich meal that you can easily cook wherever you are. That’s why I love Barilla Protein PLUS ™. I am very proud to continue to have the support of Barilla, a large family company. I’ve been part of the Barilla family since 2012 – and it’s amazing! “ 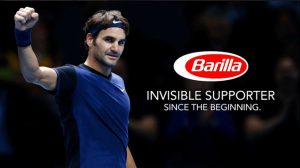 Last of Barilla’s sporting testimonials is Roger Federer, who signed a collaboration agreement last year. This partnership will last for a few years for the total amount of 40 million dollars, which has outraged the digital world and not only.Football sponsors? Yes, but behind it there is much more

«For many years I have nurtured the dream that Roger could join Barilla in the fascinating mission of helping people to eat better, for their own health and the sustainability of the planet – said Luca Barilla, vice-president. – Now this dream has come true. Roger is a person and an extraordinary athlete who over the course of his long career has shown principles and behaviors that have allowed him to win the hearts of millions of people around the world. We are sure that his values ​​and his great charisma, together with our history and our entrepreneurial style, will be of great support in bringing Barilla even further in his mission».

For his part, the tennis player said: «Barilla pasta and sauces give me all the energy I need on the tennis courts, but also to enjoy the time I spend with my family. Pasta has been part of my daily diet for so many years that this partnership has come naturally. I am excited to team up with Barilla: they are the best in the field ». Not just a football sponsors for one of the most beloved teams in Italy, the Barilla group has shown to have a really broad scope. It has understood how to give voice to its name, looking for its communication resources in many different sports.

Italian football managers: the top 10 of the most successful abroad

Pubs showing football in Rome… Are you ready for some fun?