«Here are five football champions and some of their unusual celebrations. Because when you score, joy is uncontrollable and you become a bit of am actor. Read on to discover the some of the best football celebrations we have seen coming from our champions.»

Happiness after a goal is uncontrollable, you know, and the players never miss an opportunity to vent all the tension accumulated on the field. Their, rather than just manifestations of a state of mind, are now real rituals. Yes, I’m talking about the exultation, or rather, of the most unusual celebrations and exultations of our champions. Recited at an Oscar level, or spontaneous as children, every time these best football celebrations involve the stadium’s stands, full of excited fans, who are not expecting anything but to share that moment with their heroes. 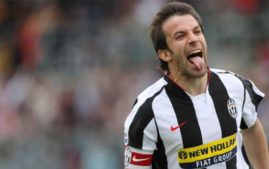 Once this explosion of joy was poured onto t-shirt prints worn before the game and under the shirt of their team, but this custom has come less and less popular due to too many warnings. Despite these risks, the exultations and celebrations have never ceased to exist and still today they are able to provoke anger, polemics, joy and fun. So let’s remember 5 among the best football celebrations of all time.

It’s 11th January 2015 and the Rome derby is being played. Lazio have two goals, Roma quiver. Then comes the captain Francesco Totti, the real hope for all the Roman fans, the one who never disappoints. And this time too, Il Capitano proved to be up to expectations: he scored two goals allowing the Giallorossi (yellow and red team aka Roma AS) to reach a draw.

After the second goal, achieved with a superb scissor, Totti takes the smartphone from the goalkeeper coach Guido Nanni and takes a selfie with his beloved curve. A gesture that makes this photo one of the most beloved and unusual football celeberations of all time, like that time with the t-shirt “I purged you again ” exhibited in an old derby.
–

It’s 21st September 2014. For the first time in her life, the grandmother of Roma’s back, Alessandro Florenzi, goes to the stadium to watch his nephew’s game. After scoring the second goal against Cagliari, thus bringing even more advantage to his team, Florenzi unleashes his joy climbing over the stands to go to his grandmother and embrace her. A gesture that has warmed the hearts of many and that will be remembered as one of the best football celebrations of all time.

After the 2006 World Championships, the Italian National team showed their skills in the 2012 European Championships. Despite the defeat against Spain, the semi-final played with Germany is to be remembered for the great techniques used, for team play and for the grit. That same determination was shown by  Mario Balotelli.

After two goals, one on the head and one on the right from outside the area, Balotelli poses as a statue almost as a challenge to the criticisms received that year. He then pulls up the shirt showing his muscles and remains so, motionless. Not even the embrace of Claudio Marchisio breaks it down. This exultation has been reused numerous times and has remained one of the most appreciated and most unusual celebrations of all time.

We are towards the end of the game, exactly five minutes from the end. Inter and Juventus are at a draw. To overturn the situation is Alessandro Del Piero who with extreme dexterity marks a perfect punishment that goes so to decree the victory of Juventus. His exultation is a pure, extinctive and brilliant gesture: the tongue. Becoming his “trademark“, this way of rejoicing has been copied by many other players to follow.

2006 World Cup Finals, Italy VS France. The extra time ends on 1-1. We get to the penalties. Italy begins: Pirlo scores but France responds immediately. Materazzi, De Rossi and Del Piero also follow. In the end the responsibility for victory is in the “feet” of Fabio Grosso. Anxiety, fear and the wait. But the Italian does not disappoint. His is a real outburst: he opens his arms, screams to the sky and then rushes to his companions. A blue human tower that makes the whole Italy move.

We hope you enjoyed the list of the best football celebrations of all times. We certainly have, since these were among the most unusual celebrations we have ever seen in our stadiums

Golf lessons in Italy: where to cultivate your talent in the green

Italian mountains, the best places for a perfect trip