Where to eat in Rome: a delectable tour of Roman street food

«Where to eat in Rome: A New Yorker’s take on Roman Street food classics that will satisfy your hunger and your taste buds. Five places to add to your list of where to eat in Rome for treats such as trapizzini, paninis,gelato, pizza, and Supplì »

When in Rome, do as the Romans do. Or more apt, when in Rome, eat as the Romans do. My first week in Rome, I was accompanied by my colleagues Ennio and Marcella on a tour of Roman street food to learn exactly where to eat in Rome.  We sampled five hot spots for traditional Roman street food, beloved by Romans and tourists alike. Here are the stops on our delicious tour of  where to eat in Rome including some of the best street food Rome has to offer.

Our first stop was Il Trapizzino. A trapizzino is a typical Italian street food dish that is essentially a stuffed pizza pocket. Il Trapizzino was founded in 2008 by Stefano Callegari in the Testaccio section of Rome. The trapizzino essentially brings customers authentic Italian dishes in a way that is easily portable and low cost. The trapizzini are filled with traditional Italian fillings that would otherwise be difficult outside of a proper restaurant setting. We tried pollo alla cacciatora, polpo al sugo, and bollito di manzo. The pockets were incredibly fluffy and the meat fillings were juicy and tender. The Trapizzino store front was filled with windows and outdoor seating that offers customers who choose to stay and sit a bright and cheery environment. It is the perfect place to sit and enjoy the summer weather or to grab a quick bite on your way to the metro. 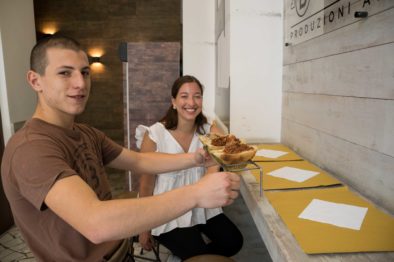 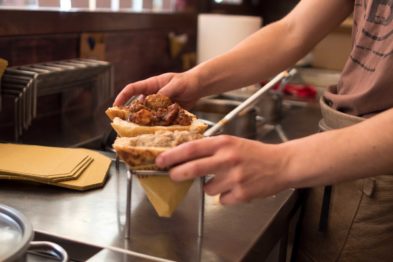 Next, we went to Duecento Gradi. Duecento Gradi is a panini shop that was created with one goal in mind: to revolutionize the world of Roman street food. Founded in 2005, Duecento Gradi sought to bring gourmet food to the streets of Rome. This philosophy is seen in the way Duecento Gradi creates paninis with the highest quality and freshest ingredients and in the tradition of baking bread at two hundred degrees. This panini place is a favorite of many Romans, and the store doesn’t hesitate to show off its own pride for Rome, with many of its paninis named after famous Roman squares such as the Cavour panini and the Campo dei Fiori panini. My personal favorite was the Risorgimento panini with salami, smoked cheese, sun dried tomatoes, arugula, and olive sauce. The storefront is modern with a retro twist and just a few minutes from the Vatican. 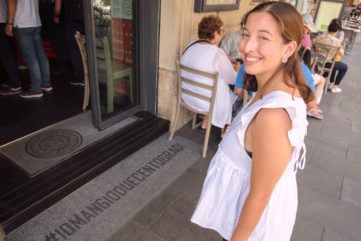 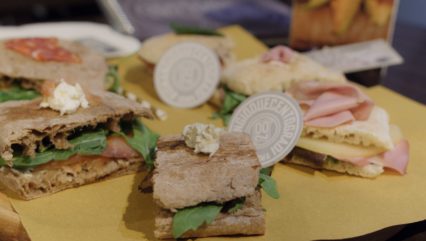 The following stop was L’Osteria di Birra del Borgo, which is known for its excellence in the art of Roman pizza and beer. The kitchen is run by the renowned chef, Gabriele Bonci. In Rome, Bonci is considered the master of Roman pizza by the slice. His pizzeria, called “Pizzarium” is in fact considered by many to be the temple of Roman pizza. Bonci’s pizza is characterized by his selection of flour and the way in which he allows the dough to rise and become light and fluffy. We were able to sample five flavors of his pizza along with the house beer. These included flavors such as pizza with artichoke cream, lamb, and carbonara with asparagus. The atmosphere of L’Osteria di Birra del Borgo resembled a speakeasy, with a very simple and unassuming storefront that houses a very modern and large bar. From the dark colors, to the large leather chairs, and wall to wall bar, L’Osteria di Birra del Borgo would not have been out of place in the middle of a New York City street. 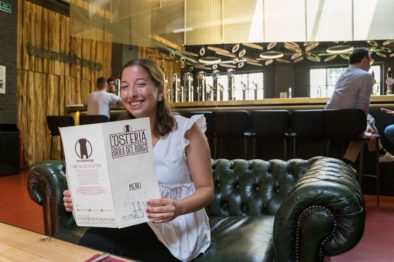 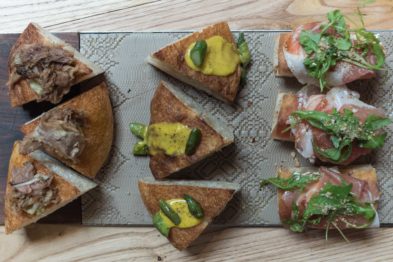 When one thinks of Roman street food, supplì is typically one of the first dishes that comes to mind. It has been found on menus in Roman trattorias dating all the way back to 1874. Supplì consists of a small ball of rice that is shaped into an elongated form and then fried. It can be found in an assortment of flavors, including Roman classics such as amatriciana and cacio e pepe, with the most traditional flavor being a simple meat sauce with a mozzarella center. The Supplizio was founded by chef Arcangelo Dandini in order to pay homage to this historic piece of Roman cuisine. The Supplizio storefront is intimate and cozy. I ate the traditional supplì with meat and a mozzarella center that shows off gorgeous strings of mozzarella when split in half. In typical Roman fashion, I ate my supplì on the street, the small but flavorful ball of rice was the perfect dish to eat on the go. 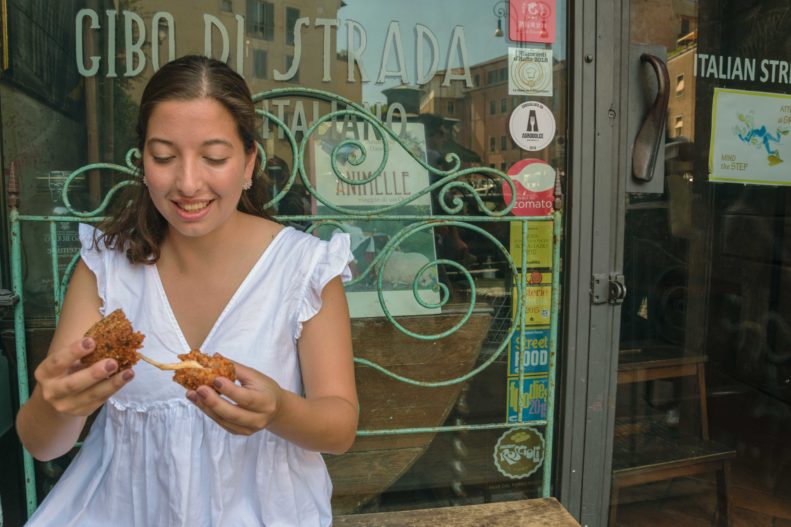 The final stop on our journey was a classic gelato at Giolitti. Opened in 1890, Giolitti is one of Rome’s oldest gelaterias. At the time of its founding, Giolitti was just a creamery, and sold only milk to its customers. Since then, Giolitti grew to include the sale of pastries and gelato and has since become one of Rome’s most beloved gelaterias. Many people choose where to eat in Rome based on convenience. With its great location, close to the city’s embassies as well as other tourist attractions, the gelateria is often visited by politicians and celebrities from abroad. For example, in 2009, the daughters of president Obama were drawn to try Giolitti’s and consequently closed the store for several hours. It has also been visited by the likes of celebrities such as Justin Timberlake. In addition to its gelato, Giolitti is known for its dining room that is decorated in Italian liberty style. The pink walls and elegant tables will transport you to the 1930’s. The gelato flavors that Giolitti is most famous for are zabaione, fig, and chocolate. I tried pistachio and hazelnut with fresh whipped cream. The gelato was creamy and flavorful, which is a stark contrast to the hard and artificially flavored ice cream that is not uncommon in the United States. Giolitti was a delightful end to a day of eating and enjoying the beautiful weather in Rome. Roman street food is a definite must for anyone trying to experience a piece of the local culture through food. 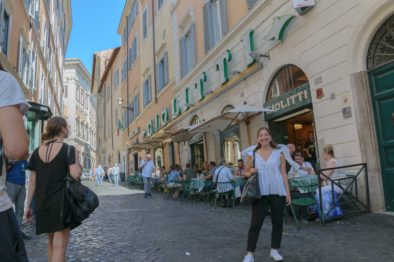 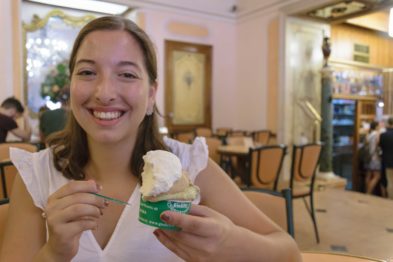 Instaborghi: Polignano a Mare, Italy, a terrace on Puglia

Unusual things to do in Italy: mysteries, legends and magical places of the Belpaese