Typical Italian dishes: 10 recipes that have made our kitchen great

«From north to south, here are the typical Italian dishes that have made our kitchen great all over the world.»

Passion, taste and genuineness: the typical Italian dishes seem to exude these three characteristics that have made – and keep making – our kitchen unique in the world. Italian recipes are among the most appreciated and imitated. From the north to the south of the peninsula, every village, every city, every region boasts its traditions at the dining table, telling stories that recall innovation, power struggles and sometimes even bloody crimes!

From appetizers to desserts, we begin our journey to discover the recipes of the Italian dishes that have written the history of our country.

We open our in-depth study dedicated to typical Italian dishes with a starter that really gets imitated all over the world: the Ascolan olives. The olives all’ascolana owe their name to the city of Ascoli Piceno, in the Marche. The origin of this recipe, according to the Ascolan Benedetto Marini, can be traced back to 1800. It seems that in those years, the cooks who worked for the local noble families invented a stuffing for olives in order to dispose of the excess meat that was donated by the peasants to the owners.

Frico (or fricò ) is a typical culinary specialty of Friuli, more precisely of the Carnia and Friuli cuisine. The recipe includes cheese cooked in a pan with butter or lard. The origins of this italian dish are very old: the first mention of frico, known at the time as “Caso in patellecte“, is contained in the work of the master Martino da Como De Arte Coquinaria, dated towards the middle of the 15th century.

Cacciucco is one of the most popular Italian dishes with the most bizarre origins . According to tradition, the famous fish soup of the Livorno area was invented by a guardian of the Fanale, the lighthouse of the port, to which an edict of the Florentine Republic forbade to fry fish. The prohibition stemmed from the fact that the oil had to be saved to feed the light of the lighthouse. From this prohibition the guardian invented the Cacciucco that, according to the local recipe, requires very little oil.

L’Amatriciana is, without a doubt, one of the most famous Italian dishes in the world. This condiment is named after Amatrice, a town in Lazio, located in the province of Rieti. In the 19th and 20th centuries, this Italian recipe became very popular in the capital, which has made it, over the years, the manifesto of its kitchen.

Trofie al pesto are among the simplest typical Italian pasta dishes and exported all over the world. Trofie is a type of pasta typical of the Ligurian cuisine, which has the form of a kind of carpenter’s shaving. Precisely because of its shape, the etymology of the word could derive from the Genoese  strufuggiâ , or rub, from the movement necessary to curl them with the hand that makes the dough roll on the floor.

Pasta alla Norma is one of the most popular Italian regional specialties. A battle horse of the Catania cuisine, this dish includes a tomato-based dressing, fried aubergines, salted ricotta and fresh basil. According to historical sources, Nino Martoglio (1870-1921), known as the playwright from Catania, gave the name ” Norma ” to the recipe. In front of a dish of pasta so seasoned he exclaimed: ” Chista è ‘na vera Norma!’ to indicate its goodness, comparing it to the homonymous work-masterpiece of the composer Vincenzo Bellini, emblematic artist of the city.

READ ALSO – Where to eat in Catania: food and wine tour of the city

The Milanese cutlet is a great classic of Lombard cuisine, which is the essence of Milan at the stove. It is one of the best typical Italian dishes and you cannot miss it! Based on studies conducted by some historians and according to a description reported by Pietro Verri, the first indication of the schnitzel in Milanese cuisine dates back to the 12th century. The plate of ” lombolos cum panitio ” was in fact contained in the list of the lunch dishes of the canons of Sant’Ambrogio during the solemn festivities. However, this emblem of Italian cuisine has always been the subject of disputes with the Austrians, supporters of the thesis that sees the Milanese cutlet as a version of the Viennese Wiener Schnitzel… 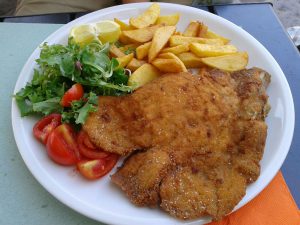 Speaking of Italian dishes and local specialties, an honorable mention goes to the venetian liver, an Italian recipe known all over the world. There are evidences of the use of the liver in the kitchen already in Roman times, in Apicius’ De re Coquinaria. To allow the liver to gain weight excessively, Apicius used to feed the animals (especially pigs and geese), with figs: hence the Roman recipe of the liver with figs that strongly inspired the Venetian version. The Venetians, to dampen the strong taste of the liver, have replaced figs with the onions, very common in the lagoon.

The chicken alla Marengo is a typical second course dish of the Piedmontese cuisine, linked to a particular historical event, namely the Battle of Marengo (near Alessandria) in 14th June 1800. In this battle, Napoleon Bonaparte won a great victory over the Austrians. To celebrate the victory, the commander asked for a special dish that was cooked with the available ingredients: chicken, river prawns, forest mushrooms, lemon, wine. Trust us, it’s a great Italian dish for you to try.

We conclude our culinary experience to discover the famous flavors of the world with a splendid (and ancient) dessert: the Biancomangiare. In the Middle Ages, the Biancomangiare was not a real dish: the most important feature was its white color, a symbol of purity and asceticism. There were several versions, both sweet and savory.

To date, Biancomangiare is a dessert curiously typical of three Italian regions: Valle d’Aosta, Sardinia and Sicily. Each of these regional cuisines gives the recipe its own connotation, to make it special and tasty.

To learn more about typical Italian dishes and traditional products of our Peninsula, read also – Typical Italian products: the 10 most requested abroad

Italian dancers: the talents of the future in the footsteps of Roberto Bolle