Francesco Totti, “the one and only great love”of the Roma football fans

«Many people ask me, why did you spend your whole life in Rome? Rome represents my family, my friends, the people I love. Rome is yellow and red. Rome, for me, is the world. This (football) club and this city have been my life. Always»- Francesco Totti

Every self-respecting story has a happy ending. Francesco Totti (official website) can certainly boast of having achieved it.

After 25 years of a brilliant career, one of the most acclaimed and respected players in the history of Italian football said “goodbye” to football. Yes, goodbye, but not goodbye for good. In fact, even if he won’t play football anymore during the AS Roma matches, he will bring with him so much more of this sport and these wonderful years of love. That of Francesco Totti was an entirely red and yellow (the AS Roma team colours) career, with his team, that of his city, which, like many other children, he dreamed of, went to see at the stadium and open heartedly cheered for. One day, the dream became a reality. Francesco Totti managed to wear the shirt with the wolf, the shirt of his beloved Rome, and from that moment on, his love and passion have also become a pleasant job. 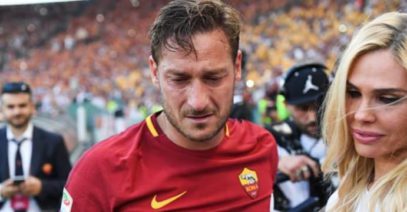 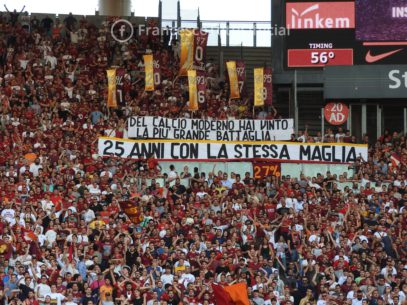 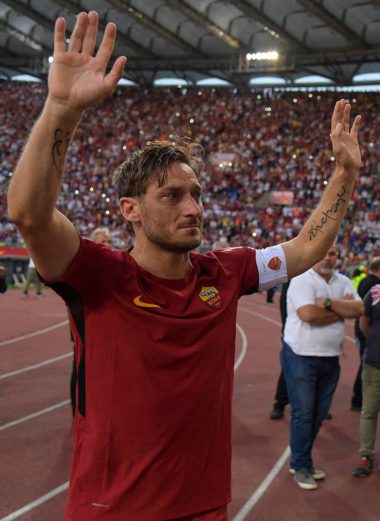 On Sunday May 28th 2017   Francesco Totti’s football career clockstopped. At the same time in which his Rome team conquered the second place, Francesco Totti hung his boots on the nail. It was a very hard moment for him, because when your routine coincides with your greatest passion, saying “enough” is very difficult. It was also difficult for his fans, who never stopped loving him, acclaiming him, and that made him become the champion he is and that in their hearts, in their memories, he will be forever.

At the final whistle of the match, one of the most touching ceremonies that the football world has ever seen began. Francesco Totti’s entry into the field, with the soundtrack of the “Gladiator” in the background, the Olympic stadium full of people and entirely colored in yellow and red and the South Curve with the breathtaking choreography “Totti is Rome” was a truly touching moment . These were the images transmitted on television on Sunday evening, images that will remain in history and which did not hold back anyone’s tears (including Lazio fans). 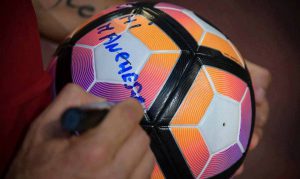 The round of the field, the embrace of his sons and his wife, the warmth of his companions, managers, technicians and especially the tears of the fans, were the best way in which Francesco Totti could finish his fairy tale. 70,000 people who were in pain and were still unprepared to see, or even think of, a Rome without its captain. These are the moments that any player at the end of his career hopes to see. It means they have reached their public, having worked hard for them too, to see smiles in the stands during the victories and tears during the defeats.

But the end of Francesco Totti’s football career is not a defeat. Quite the contrary. It is the demonstration of how a man has managed to keep his human and professional figure standing for 25 years, facing his difficulties and growing, taking his fans on his side, getting the affection of many people. It is a victory in all and for all Francesco’s farewell.

“I like to think that my career is for you a story to tell. I take off my shirt for the last time, I bend it for good even if I’m not ready to call it quits and maybe I’ll never be. Excuse me if in this period I have not clarified my thoughts but turning off the light is not easy, now I’m afraid, it’s not the same thing you feel before an important game. Allow me a little fear, this time I need you and your warmth, that you have always shown me.”

These are some of the words that Francesco Totti wanted to use to thank his fans, to show the same gratitude that they have never ceased to have towards him. Closing a career like his, thinking of Rome without him, for those who support Rome, is difficult. It means a bit of distorting what is the essence of football, and all the emotions related to this wonderful sport. But also on the other side the uncertainty of the future, the inability to know what to do and where to go, the difficulty in leaving all this, leaving the team of the heart, in “folding” the only shirt that he ever decided to wear, it is not an easy thing. It means “growing“, it means learning to reinvent oneself and it means having the strength to think about being a Sunday championship spectator, no longer a player.

At this point I think that many have written about Francesco Totti’s career, his love for Rome and his farewell ceremony. So now I feel like dedicating some space to his Fans. I gathered little bits of feelings that this event so important in the history of their team, has aroused. And I want to bring them back to you. Because I think that they, together with the Captain, are the protagonists of this beautiful story.

The awards have been many. There are those in the South Curva “he hoped to have died before” , some say that “a life would not suffice to forget it” , there are those who “already miss him” , and still who “after four days of crying have no more tears to shed “. Photos and videos went viral on social networks.

One of the most popular is the Draw my Life, in which a hand draws the life of Francesco Totti, while he in the background tells it. Then there is the poem written by Pierfrancesco Favino, who pays homage to his “King” in Roman slang.

“With his foot that is feather, and then it becomes a cannon, with the heel, neck, flat, and spoon, he has made me stand up more than two hundred times, as many as the balls collected in the goals. And the world wanted it but you had it. That’s why I’m sad, because I do not have one anymore”
Pierfrancesco Favino

Even the roads lead to Francesco Totti. At Piazza di Santa Maria Liberatrice, one of the landmarks of Rome’s most Romanist neighborhood, Testaccio, a few days ago, the fans superimposed with a sticker the plaque in the center of the square’s gardens, changing its name to “Piazza Francesco Totti, VIII King of Rome “. 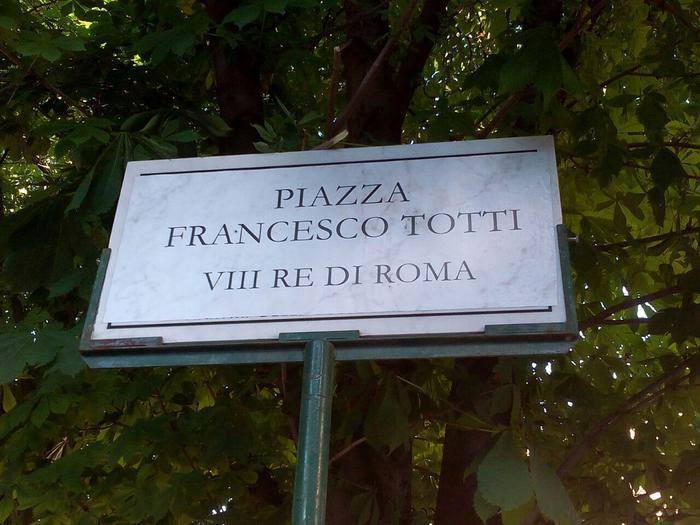 The tributes to the captain really were a lot. Banners, sweaters and especially letters. Many letters. Beautiful, moving, exciting letters. I conclude with one of these. Read and try to imagine such a great love.

“March 28, 1993. I was a 6 months old, dear Francesco. I was already dressed in red and yellow from head to toe because here, in my family, you either support rome or you support Rome, you have no other choices. cheering, or better honoring, one of the two teams of Rome (as if we did not know that the team of the Capital is only one), is imposed as if it were a commandment. football is passion and love for the team of your heart becomes visceral.

I remember when I was a child: mom and dad put me in front of the maxi-figurines with the faces of Roma players and you know what I had to do? I had to guess the names. i knew them all by heart: Cappioli, Aldair, Fonseca, Di Biagio. Then there was the one that made me guess last, the most important one, the one that had to remain imprinted on me: it was you! You see for us you are not only the strongest player in the history of Rome, you are not only the legend that on may 28th 2017 played for the last time at the Olimpico, at home, but you are a piece of our life that goes away. Like when you finished elementary school, middle school and left your classmates with whom you shared 5 years of your life! Suddenly you felt an emptiness inside, you thought you would never find anyone like them, that the days, the beautiful days, of games and laughter, ended there. Here with you will be the same thing. we should begin to enter the perspective of not being able to rely on the field on that number 10, that has enlightened us for 25 years. and at that point the comparison will fall: it will be much more difficult to separate from you, from your game.

I remember 2000-2001perfectly. I was 8-9 years old, I was starting to cheer way too passionately: if Roma lost I would cry, if Roma scored I risked a heart attack!  at the time I watched all the games at my grandfather’s house. I remember that every time you marked or played a game of yours, he always told me that you were and that you would be the strongest player in our history.
But the image of you that I will always bring behind, is that “He’s yours” referred to us after having hit buffon in Rome-Parma! Yes, he said “He’s yours” and did not say it at random. We are your people, we are the ones you love and who love you, we are the ones who, more than 300 times, you made shout, embrace, rejoice, enjoy, but above all we are the ones you made proud to be roman for the simple fact that in the world you represent yourself. There were also bad times, we clashed and we were sad for your silences but compared to 25 years in which you have transmitted only love, loyalty, class and genius are worth nothing compared to those bad times. on the other hand ours is a love story and in 25 years it happens that you fight, no?! But it is done because there is affection, esteem, feeling, because the other person is loved so much that he does not want to lose it all. This is our story with you.
sunday, may 28, time put a stop to one of the strongest footballers in the world, to the person who fought for his people, fought and who defended with all his strength. time will say “enough” to the player who having the opportunity to go play elsewhere, in places where he could have won so much, has always decided to continue to be loyal to his people, his favorite team and wanting to win a single championship but win it and celebrate it with us for a lifetime. it will be hard to break away from you, and we will understand it further, when that number 10 on the back will have another player, when we begin to understand that another one like you will never exist, neither here nor anywhere else in the world.
I can only tell you thank you for all you have done for me, for the importance you have in my life, for what you have meant and for what you will continue to mean! You are my superhero and if ever my son should ask me to tell him a love story, well I will tell him yours, indeed ours because there will never be a more true thing! thanks again for everything, Francesco. thanks my Captain. I love you! Francesco Totti for a thousand years again!”

A boy from the south

5 star hotels in Italy: the best places to stay