«Can one discover the Italian wonders by cycling around? Absolutely yes! From the Lungotevere to the Dolomites, here are the best cycling tours in Italy, to get the most out of the beauties of our country»

“Strolling by bike next to you, pedaling without rush on Sunday mornings …” This is how Riccardo Cocciante used to sing in his famous song “In Bicicletta”, conveying all the lightness and the magic of a ride during a sunny morning. Discovering all the wonders, natural or not, of our country by bike, is surely one of the best ways to enjoy all its splendor. It is also an excellent solution to spend a day in the spirit of health and fitness. So, lovers of cycling, nature and Italy, report for duty. We present you all the best cycling tours in Italy, which can offer you a relaxing ride among the beauties of our peninsula

Cycle path of the Dolomites in the Veneto region

Let’s start with the first of our cycling tours in Italy: cycling among the natural wonders of the Dolomites, a World Heritage Site, meeting dense forests, ponds and streams, is a unique sensation, that only a bicycle ride on the Dolomite Cycle Path can give you. The so-called Lunga via delle Dolomiti goes from Dobbiaco (in Trentino, ed) to Calalzo di Cadore (or vice versa), and you will discover all the beauties of the Veneto region, as well as its cultural treasures. You will pass by Cortina, the tourist place of the Dolomites par excellence, and for the characteristic Pieve di Cadore, birthplace of the famous painter Tiziano Vecellio. If you are a lover of Italy’s culture and natural spectacles, the Dolomite Cycle Path is the perfect track for you. You can find all of the information on the official site of the Dolomites Cycle Track.

The second of our best cycling tours in Italy is the cycle track of the Ponente Ligure, which allows you to fully enjoy the beautiful seascape typical of this region. You will cross 8 municipalities: from the picturesque village of San Lorenzo al Mare, passing through Riva Ligure, you will arrive in the splendid and famous Sanremo, which at this time of year, as you know, quivers for the upcoming Italian Song Festival (here the competitors).

This track will allow you to discover the places and all the most important events of the Riviera dei Fiori, home of the Taggiasca olive. In addition, the bike path also offers you the opportunity to take a day trip, starting in the morning from San Lorenzo al Mare, then take a break at some coves in Aregai, ending in the evening towards the beautiful Sanremo. On official site you can download all the initiatives and the complete map of this interesting route. 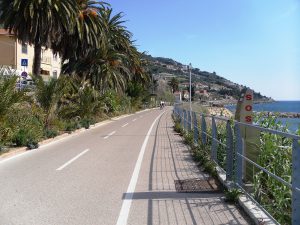 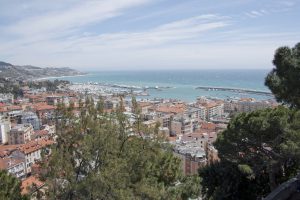 The route of the Mincio cycle path, which follows the course of the river of the same name, starts from the picturesque town of Peschiera del Garda reaching as far as Mantova (did you know that it is the most green city in Italy?), in a 45 km route. The river is the absolute protagonist of this route, as it originates from Lake Garda in Peschiera and arrives in Mantua, where it branches off into the three lakes that surround the city. From the colorful town on Lake Garda, you will pass through natural wonders and villages with ancient charm, with fortifications and ducal palaces, such as the medieval Borghetto sul Mincio, known for its mills. Cycling along this cycle path also means visiting the splendid Mincio Natural Park, an area protected by the great naturalistic and animal variety. It’s the perfect choice to ride between one of the most beautiful lakes in Italy and a city full of culture: for this reason we consider it one of the unmissable cycling tours in Italy. 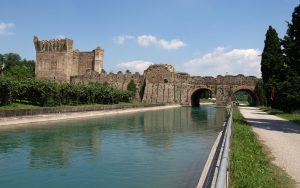 By Uwe Barghaan (Own work) [GFDL or CC BY 3.0 ], via Wikimedia Commons

Cycle path on the Tiber in Rome

The Lungo Tevere track is the longest in Rome, and crosses it far and wide: in fact this cycle touches the historical points of the city, such as Trastevere (click here to discover all the secrets), Castel Sant’Angelo, Ponte Milvio etc., up to the city outskirts. The itinerary goes from piazzale Ponte Milvio to Tor di Quinto, up to the Grande Raccordo Anulare.

Usually you are used to seeing Rome from above,  while here, the view is all from the bottom: but even while cycling along the LungoTevere you discover another side of the caput mundi, although you are among the walls built in the 19th century to curb the river. The most striking features are under the bridge of Castel Sant’Angelo, where you will be fascinated by the fantastic statues of angels, and that of the legendary Isola Tiberina, which in summer is populated with stalls for the manifestation of the Tevere expo. This is another must amongst our suggested cycling tours in Italy this is one not to be missed. 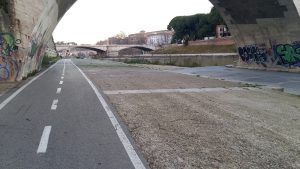 Italian mountains, the best places for a perfect trip