Must see in Rome: magical places and optical illusions of the Capital

«We accompany you to the Capital for a tour of illusions, light games and hidden curiosities. Here are some magical places that you must see in Rome.»

The wonders of art, architecture, engineering and landscapes are the certainties of Rome, like many other Italian cities. If we pay a little more attention, however, we can see some singular optical and acoustic illusions around us that deserve more consideration. Do you already know any of these? These are some of the most beautiful magical places you must see in Rome.

We will start with the easiest: Via Piccolomini. A road that just as it’s taken from the ancient Aurelia, points straight to the dome of San Pietro. Probably, fascinated by the grandeur of the dome, you will begin to walk this path with wonder until you notice something unique: as the meters increase, the size of the dome decreases. Explanation? One, and it’s simple: the illusion is not given so much by the cupola as by what frames it. The road is in fact crossed on both sides by a series of buildings, and these are the key. At the beginning of Via Piccolomini the human eye sees a single subject, the dome, and its size is the only thing perceived because of the buildings that frame it. Along the 50 meters of the road, however, the eye sees the space around the dome thanks to the background previously hidden by the buildings, and perceives a different dimension. Among the illusions we are going to talk about, it is perhaps the simplest but also the most fascinating magical places must see in Rome. 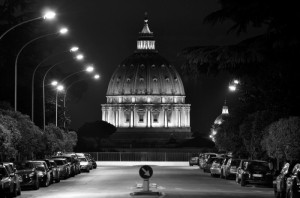 The second “optical effect” that you absolutely cannot overlook is that of the  colonnade of San Pietro. Piazza San Pietro is among the most famous places must see in Rome among tourists and architects, for the magnificence of its structure. A large colonnade around a basilica and signs on the ground that perhaps not everyone has noticed, including an engraving that recites the center of the colonnade, on which the observer can position himself. Entering San Pietro, the colonnade will fascinate us for its Doric style, but arriving at this precise point the observer will see a single row of columns, as if the others had disappeared. This is the illusion that Bernini has designed by calculating the ellipse’s rays whose center is given precisely by the abovementioned incision.

The same effect can be perceived by putting ourselves on the two fires of the ellipse (looking for them on both sides of the square), whereas moving away from here, even slightly, we will find the numerous columns seen up to that point. Those who have already been to Saint Peter did not hesitate to try, also because among all of the optical illusions that of the Vatican is undoubtedly the most famous. The colonnade, however, is not the only one to provoke optical illusions to tourists and residents of San Pietro. As is the case with Piazza del Campidoglio, in fact, the façades of these two buildings are on a trapezoidal plan and along the respective entrance steps they will look bigger than they actually are.

Perhaps you know less of the Church of Sant’Ignazio di Loyola, whose visual illusion is given by the dome. The architects were not the only ones who had problems managing the spaces, and the painter Andrea Pozzo who painted the church of Sant’Ignazio shows it to us. His mastery was no less than the architects mentioned above. To make up for the lack of funds that could not allow to build a dome, he had to play with perspective and create a gimmick. Here’s how today, placing ourselves under the dome, we will not notice anything strange until we move away to discover then that the dome is nothing but a flat ceiling, designed as such! And Pozzo’s mastery does not end here: if we place ourselves on the golden circle indicated between the central nave and the transept and look upwards we see a very high ceiling which, in reality, does not exist. Pozzo’s ability was to paint a sort of 3D fresco that gives us this impression of depth. Incredible, no? Go to Campo Marzio… you will find one of the most beautiful magical places you must see in Rome

Less known is the wall of Piazza del Popolo. Every inhabitant or tourist has probably ended up there, but have you ever tried to communicate with a person on the other side of the wall? Yes, this is possible, thanks to its shape. The echo that is given by the concave shape of the wall allows us to communicate without even raising our voices. An acoustic and not an optical effect, but certainly to try out: take advantage of the 100 meters of the wall or even the first 50, placing yourself in the fountain, and the other person will speak to the stone at the corner of the other end and will have no problems being understood. I almost forgot: the side on which you must lean is that opposite the Pincio.

If you already knew this effect, I wonder if you have ever tried to do the same thing in the Church of San Giovanni. Even here, in fact, leaning on the colonnade you can communicate something to those who are on the other side of the arch, without being heard by anyone else. The communicating columns, of the four present (two each side) are the diagonal ones.

Next magical places must see in Rome: the perspective gallery of Borromini at Palazzo Spada. Do you know it?  Palazzo Spada is the seat of the Council of State, and the gallery inside built precisely by Borromini hosts a beautiful illusion. The gallery is built on a corridor and if you place yourself at the entrance arch you can see the statue of Mars right in front of you. Initially, this will seem very high and the gallery infinite, when in fact the corridor is only 8-9 meters long (despite about 30 are perceived) and the statue is 60 centimeters, less than a meter in height. A key role is obviously played by visual illusion. Even here the one responsible is Borromini, who has exploited the trick of accelerated perspective so that the colonnade, the ceiling and the floor are not parallel as one might suppose or imagine but converge in a central point represented in this case by the statue at the bottom. This is how approaching us we can perceive its natural size. To get there, you have to arrive in the Campo de’ Fiori area, in Trastevere.

Finally, one thing I have already talked about in questo articolo, albeit in a different way, is the lock of the Villa dei Cavalieri di Malta.