Monte Argentario: a dream weekend surrounded by the beauties of Tuscany

«Have you ever thought about a weekend spent in the crystal clear waters of Monte Argentario? Here are some tips for beaches and places not to be missed. »

Monte Argentario, a picturesque seaside resort and easily accessible by those who live in Rome, has been one of the most popular tourist destinations of recent years. The municipality of Monte Argentario (institutional site) is a promontory in the province of Grosseto, in Tuscany, touched by the waters of the Tyrrhenian Sea and the Orbetello Lagoon.

Spending a weekend here means getting away from the daily chaos, to immerse yourself in a place where pristine nature and crystal clear water are the protagonists. The beaches are many and all differently beautiful, as well as the natural views offered by the hinterland. In terms of residential areas, the recommended locations to enjoy a holiday in full marine style are Porto Ercole and Porto Santo Stefano. 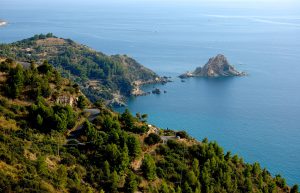 Let’s see together how to spend an unforgettable weekend on Monte Argentario.

Let’s start from the beaches. You would go to the Argentario especially for its crystalline sea and for the bays that offer breathtaking landscapes. Also by virtue of this incipit, the first topic to be addressed can only be that relating to the beaches. The longest and most suitable expanses for families are the two sand hooks of Giannella and Feniglia, which delimit the Orbetello Lagoon to the north and south respectively, thus separating it from the sea. These beaches are sandy, very popular, and offer plenty of choices as far as bathing establishments go. To these we can add the POzzarello beach, much quieter, or the Cantoniera, a small sandy and pebbled beach, lively and very busy.

For those who want to get lost in the wild Mediterranean vegetation that the Argentario offers, the solution is to enter the coves of the promontory. Equip yourself with sneakers, water and backpack to reach these little pieces of paradise, where the water is transparent, people are few and the cell phone, more often than not, does not have signal!

Leaving from Porto Santo Stefano you can see Cala Grande, recognizable thanks to the large number of boats that moor in front of it and which can be reached by following a shaded path of about 500 meters. Within this cove it’s possible to choose between three different beaches, all equally characterized by the presence of a crystalline sea, where bathing is a must. Further on is Cala Piccola, which can be reached via an easier path, with a paved road. But the cove that undoubtedly wins over the others is Cala del Gesso. Here you can admire an amazing landscape, with turquoise waters which you can immerse yourself in after the long and steep walk of about 700 meters, necessary to reach it.

Mar Morto is another cove of Monte Argentario which is absolutely not to be missed. Its name derives from the presence of a rocky barrier that prevents the waves from reaching the shore directly, thus forming natural pools in which the water is always calm and allows bathing in total relaxation. The backdrop of this bay is among the most beautiful of the Argentario, rich in fish. Impossible not to mention the Cacciarella, a very small sandy beach, set between two cliffs; the path from the road is about 500 meters long and is quite challenging. It’s good to wear a mask to admire the wonderful backdrops. In the cliff to the east there is the Grotta del Turco, the access to which is barely visible, but the interior is large.

For those wishing to take the ferry and spend a day on an island, Giglio is the solution. It’s a wonderful island, surrounded by a turquoise sea and embellished by various villages. It starts from Porto Santo Stefano and arrives in an hour at Giglio Porto, from which, then, even on foot, it’s easy to reach the Cannelle beach. This, together with the slightly distant beach of Caldane, is the small paradise of this beautiful island.

Once you have spent a pleasant day at the beach, the Argentario also offers many exclusive clubs where you can enjoy an aperitif, a dinner or after dinner. Porto Ercole and Porto Santo Stefano, in fact, are the most characteristic inhabited centers of the Argentario. Over time they developed along the natural bay and are both equipped with a port.

Since 2014, Porto Ercole is part of the most beautiful villages in Italy (If you’re curious, take a look here); in addition to the natural beauties, its charm derives from the imposing Spanish fortresses that were built in the 16th century during the State of the Presidi: Forte Filippo, the Rocca and Forte Stella are three perfectly preserved fortifications, from which, among other things, you can admire wonderful views of the sea. The village is characterized by alleys, squares overlooking the sea and stairways that lead to the church and then the Rocca. They can’t be accessed by car, which allows you to enjoy the pristine beauty of this town, built on the rock. The promenade along the seafront is the strong element of the tourist life of Porto Ercole; there are local sea view places to have aperitifs, such as the Bi Bar, or seafood restaurants where you can eat beautifully for lunch or dinner, such as La Pinta. For after dinner, however, the premises are transformed and we can also add the famous Bar del Porto or the Barcollo, a location very popular with the young, which in fact seems to be the beating heart of Porto Ercole’s summer.

Porto Santo Stefano, instead, another pearl of Monte Argentario, is a picturesque fishing village and a holiday resort already appreciated at the time of Imperial Rome. It overlooks a bay dominated by the Spanish Fortress. The inhabited center of Porto Santo Stefano develops along the two ports. The commercial port, the biggest one, is the first that you come into when entering the town, fishing boats moor there and so do ferry boats for the islands of Giglio and Giannutri. The port of Pilarella, instead, is Porto Santo Stefano’s place for walking and relaxing. Even here the seafront, designed by Giorgetto Giugiaro, offers a wide choice as for aperitifs, dinner and after-dinner. The view of the rest is not far behind: a port with several boats moored, which is greatly illuminated, especially at night. For the more romantic, however, there are several possibilities to have a great dinner with sea view. The clubs to try are Il Moletto, La Caletta and I due Pini. But even the restaurants that offer convenient and after dinner aperitifs are not to be underestimated, considering the beauty of the context in which you will find yourself. Furthermore, even reaching Porto Santo Stefano is a pleasant experience. In fact, you follow the panoramic road, which km after km offers a succession of breathtaking landscapes, each one included in the stretch of the Argentario coast that overlooks the open sea. And for lovers of adventure and thrills, the Capo d’Uomo Falesia is the right solution. It’s a wonderful vertical wall overlooking the sea and equipped for climbing. Finally, at the Argentario Polo Club, in Le Piane between Porto Ercole and Porto Santo Stefano, in a fascinating setting, dominated by vineyards and olive groves, you can watch exciting polo games. Every year, from May to September, in fact, many tournaments are organized that attract players from all over the world.

In short, I hope I have convinced you. You just have to organize your weekend in Mount Argentario!

Places to visit near Rome: 10 destinations to choose from

Best places to get married in Italy: 5 locations for a dream wedding